Kimberly-Sue Murray is a Canadian actress who portrays Danika Dubov in the first season of V Wars.

Toronto-based actress Kimberly-Sue Murray is a graduate of Norman Jewison's prestigious Canadian Film Centre (Actors Conservatory 2011-2012). Originally from the Gaspé, Kimberly-Sue studied professional theatre at Dawson College in Montreal to then pursue a film/TV career in Toronto. You may have seen her in shows such as Being Human, Murdoch Mysteries, Beauty and the Beast and most recently The Listener. Her selected film credits include; The Good Lie, Ben's at Home, Rattan, Tarsem Singh's Mirror Mirror, and the futuristic sci-fi thriller The Colony. She stars in D Films/NBC Universal's The Scarehouse hitting theatres early 2014. 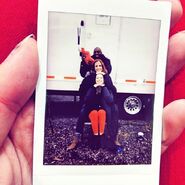 Sydney Meyer, Adrian Holmes, Kimberly-Sue Murray "I can now finally officially announce that for the past few months I've been filming my first series regular role as Ava O'Malley on @vwarsnetflix . This role has been nothing short of a dream come true. I've learned so much getting to explore this character and work along side @adrianholmes @iansomerhalder @ksuemurray @hijackylai @bradturnerdirector @tjscottpictures @jessicatography @jonathanmaberry and so many other amazing artists. Unbelievably grateful and so excited for everyone to see it! 🙌❤️" Oct 16, 2018

Brad Turner, Kimberly-Sue Murray, Adrian Holmes "And that’s a wrap for me on V-Wars. I’m so incredible stoked for everyone to see what we’ve been working on. Thanks for the snap @sydneymeyer48!!! With the Boss, our amazing director, @bradturnerdirector and our leading man @adrianholmes !!!"" Oct 15, 2018

Community content is available under CC-BY-SA unless otherwise noted.
Advertisement